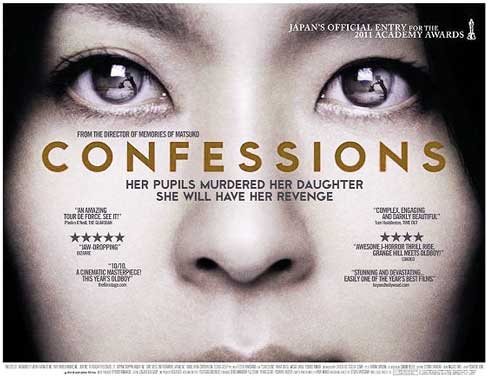 Birmingham’s International Film Society will be hosting two exclusive screenings of two contemporary Japenese Films Fish Story at 6pm and Confessions 8.15pm on Tuesday, 22 March. The Film night will be the first public screening of these films in the city. Giving Birmingham residents the chance to experience the cultural phenomenon that is Japanese Cinema.

Japanese cinema has becoming increasingly popular over the past decade, in particular its strand of Horror classics, which have been made into countless Hollywood remakes, including The Ring films and even Martin Scorsese’s epic gangster flick The Departed. So this is a perfect opportunity for any cinema-goer to see these films, before they are undoubtedly purchased, or butchered – depending on your perspective – by Hollywood.

Fish Story is set in the year 2012, a giant comet is due to collide with the earth that will end all humanity. In the Coconuts Disk record shop, three men are debating their final moments while listening to ‘Fish Story’, a song, recorded by a Punk band in 1975. Telling a tale that spans over four decades, the film follows the characters as they try to search for a way to save the world. However, does the key to stopping the ultimate destruction of planet Earth, lie in the words of this obsolete Punk record? This unpredictable and absurd tale has been described by Nippon Cinema as ‘An incredibly fun film that lends itself to repeat viewing.’

The second screening Confessions tells the disturbing and haunting story of a secondary school teacher, who on her final working day talks to her pupils about her three year old daughter, who was recently found dead in the school’s swimming pool. She also tells them that she believes that the murder was committed by someone in her class. Thus begins a very dark and disturbing film which recently swept the Japanese Academy Awards.