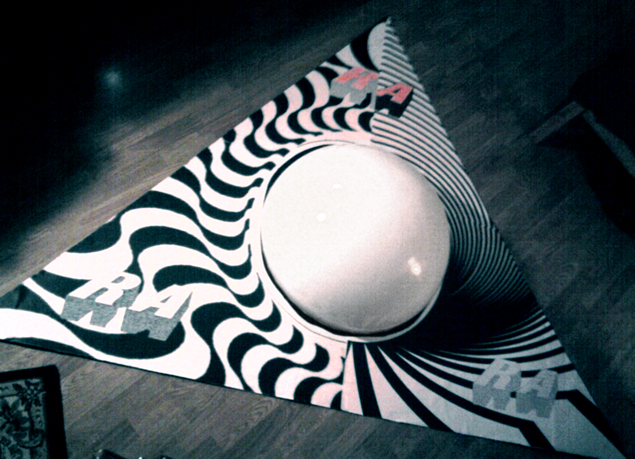 Ross Cotton hangs out at Flatpack’s Ra!Ra!Ra! event …. I couldn’t think of anything better than lounging the end of the week away on sofas, complete with cushions and homely rugs, as Grandmaster Gareth came armed with an array of Ra records and one intention, to take us all on a journey to the depths of Sun Ra’s homeland, Saturn.

The Edge, located on Cheapside, was reconstructed into a whole new alien environment, drifting from Earth to the outer cosmic waves of space, in order to fulfil a celebration like no other.

Starting at 8pm, Ra’s musical beginnings came at doo-wop-pingly good vibes, leading the trickles of fans to pay their respects to a truly iconic avant-hero, as well as experiencing a good old knees-up along the way.

Ra’s fascination with psychedelic Egyptology became no shock after a few lagers, fixating a pyramid-shaped screen, equipped with a trend of extravagant visuals that hypnotised all into the one and only Arkestra’s groove of jazz.

While the viewing of Disney’s Pink Elephants on Parade provided the perfect insight into the pioneer’s inspirational intake, lending a helpful hand to those unfamiliar with the space/jazz legend’s work.

Musings of short films captured Ra in elated glory, sights which are rarely glimpsed in essence, leaving fans transfixed and wide-eared towards their electrifying icon.

Though the time had come, 15 minutes after the stroke of midnight, to send our message back to Sun Ra’s homeland.

With a helium-fuelled satellite launching it’s path to Saturn in triumphant red and blue flashes, fans begin to chuckle at the prospects of seeing the device photographed in the sky for the morning’s newspaper.

By now, there were very few flying saucer-topped cosmic cupcakes left to indulge on, as the night began drawing to a close.

Sun Ra’s catalogue left visitors feeling culturally educated and inspired, witnessing an otherworldly experience that could only truly be enhanced with the man himself, cloaked in astral sounds of the universe.