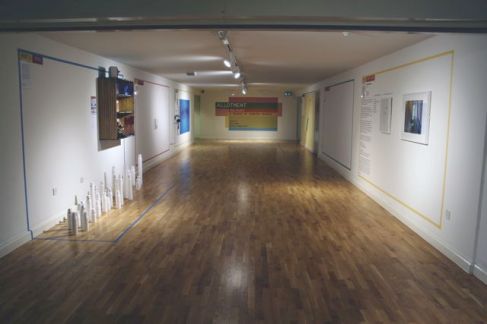 Far from being the favourite pastime of British granddads, of which Alan Titchmarsh is the poster boy, the ALLOTMENT project is a new initiative from mac designed to cultivate diverse, young artistic talent of all guises and help them flourish.
mac’s arena gallery has been split into ten segments of ‘Plots’ with eight of the plots being given to Birmingham based curators and artistic groups to cultivate as they choose over the coming months.

The final two ‘plot holders’ were left to an open call and announced at a celebratory event that took place in March, which included a temporary shed serving soup in Milk, Two Sugars cups courtesy of ‘plot one’ holders Trove, ensuring attendees left with their own little piece of art.

One of the final plots was awarded to textile designer, lecturer and curator Helen Foot from Shropshire. With her own design company and extensive experience Helen’s work has introduced her to some of the brightest up and coming talent from around the country, with each helping Helen bring a mixture of colour and contemporary style to her plot.

The last plot was awarded to a collection of Birmingham artists, who joined with artists from Bordeaux. They will develop the plot under the collaborative name Dialogue, building on a four year relationship with mac.

Other plots of interest include plot 5 run by the mac staff and featuring a recreated library from 1974 (the opening year of the Central Library), where visitors can sit and delve into the selection of books. The plot is dedicated to the memory of Birmingham born library architect, John Madin, who passed away recently.

With ten plots, a wealth of talent and constantly changing artistic landscape, the coming months are sure to see a ripe harvest of creative expressionism at its best.