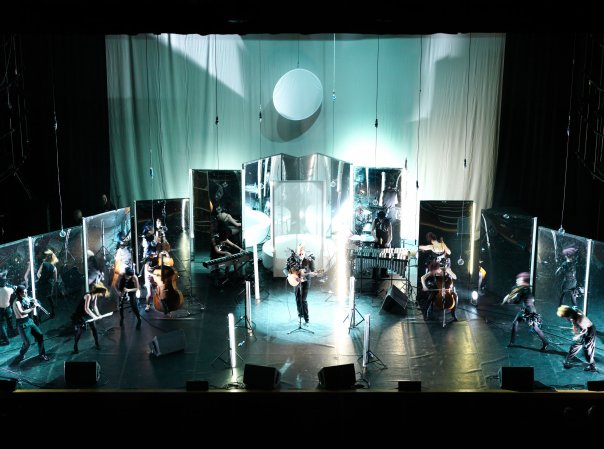 Is music only listened to, and art only seen? The Irrespressibles don’t seem to think so; they’re also going to be playing in a church.

The Irrepressibles are a weird, camp and wonderful art pop band (not pop art!) that merge art with traditional orchestra and pop music. But their performances are less about tomato soup and more about using theatrics and modern dance to create a highly interactive musical extravaganza. The highly decorative church is only incidental to the grandeur of the band and will only enhance the extravagance of the performance. Their performance is perhaps more spectacular because of the amount of people in this burgeoning ‘Crowd band’. The 10 piece head count is made more remarkable by the elaborate costumes and unique sets and lighting, which appear on stage. Their highly theatrical act can only be compared to circuses, where the music and clowns bound around together with highly stylised costumes that border the burlesque.

Composer and artist Jamie McDermott, who appears to be a hybrid of Lady Gaga and Boy George, is the front man from the group and his theatrics, as well as the vocals are reminiscent of the Dresden Dolls penchant for re-characterising themselves and their characters.

The band will re-enact their debut album ‘Mirror Mirror’ in a performance that retells the themes of the album. Mirror Mirror is the explorative and confessional voice of McDermott which includes songs; ‘My Friend Jo’ and ‘Forget The Past’. Love, angst, and loss are the building bricks of this fantasy fairytale music but whether they will ascend to artist status on the night, the audience will have to decide.

The Irrepressibles play in Birmingham on the 10th November at St Martin’s Church next to the Bullring.